Is It Good To Buy Stocks After A Market Crash? 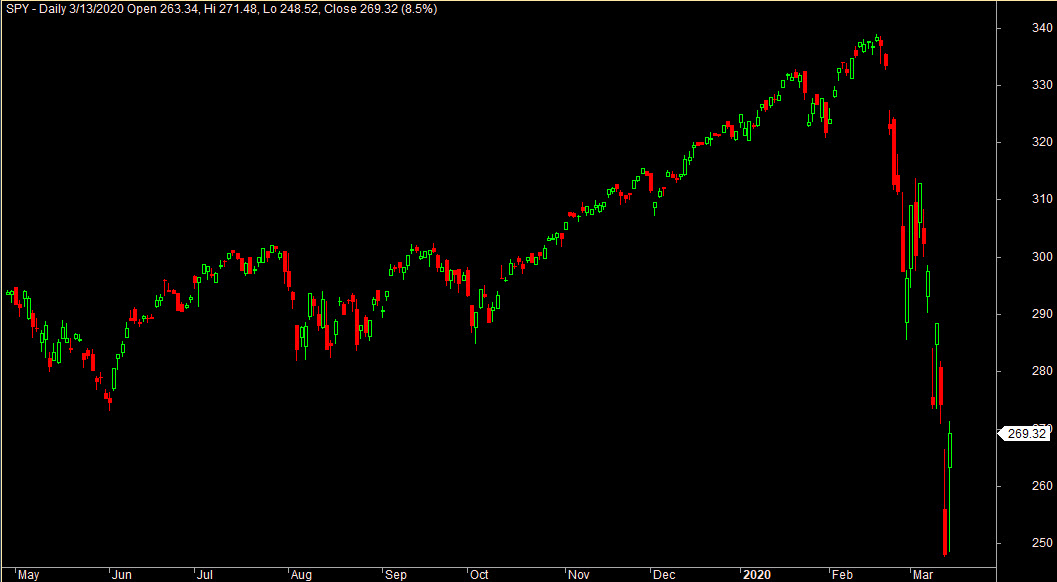 ...it is no surprise that I am seeing this question everywhere.

The simple answer is that buying stocks after a big drop in the market is just about the best strategy any investor could ask for. You would buy your stocks at bargain prices and, after such a drop, the market could be expected to put in a good sized move to the upside. Taking you along for the ride. Lifting the prices of your stocks, and presenting you with a good profit.

Life is rarely that simple.

The problem is, of course, that identifying when the market fall has stopped is a problem which many thousands of traders have failed to solve.

At least, with any consistency. There is always the odd hero who calls a market bottom perfectly, but history shows that he will be unlikely to repeat the achievement.

Take a look at this chart of SPY, and imagine how you might have felt at each of the points where the market put in a low and bounced.

At what point would you have thought that the market had made a bottom, and the fall was over? How many people do you think got this wrong? And what would the consequences have been for those errors? 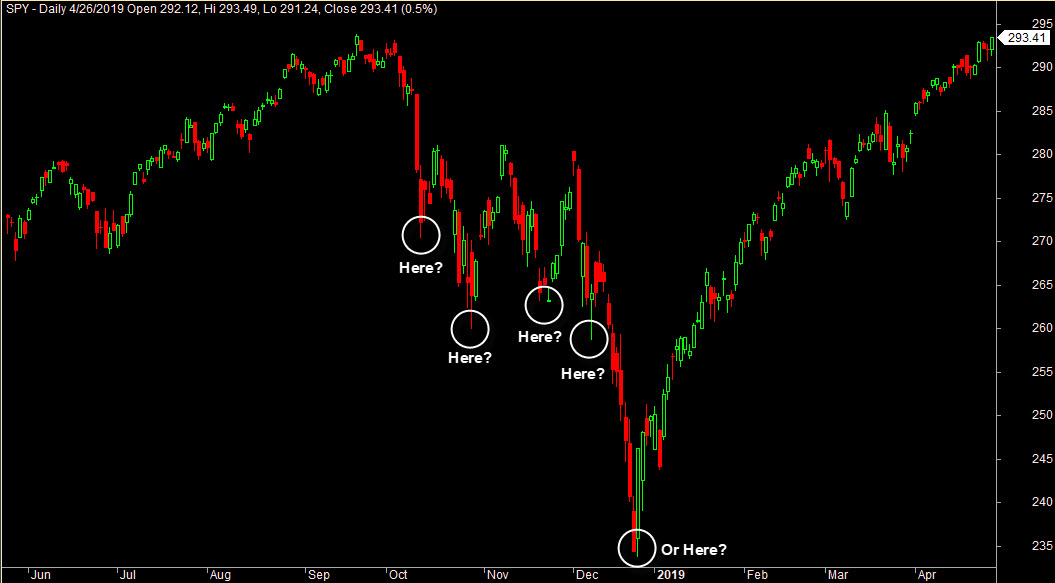 Among the many market cliches, there is one which contains some wisdom. It is ‘Never try to catch a falling knife’.

The phrase is all about the times when the market has had a sharp fall and has then put in a bounce or a pause of some sort. It’s about those traders who buy stocks at that point, thinking they have a bargain, only to see the market fall resume and another sharp drop which cuts them to pieces.

And it is indeed wise advice to never do this. After a market fall, and some kind of pause or bounce, the highest probability is actually that the fall will continue, and the market will drop further.

Trying to catch market tops and bottoms has been the downfall of many a trader. It is a very common and widespread reason for traders failing.

In my opinion, there is a much better strategy. Waiting for some clear evidence that the market has finished falling, and has established a new uptrend will give a much higher probability of success.

Of course, we then have the question of how to identify a new uptrend?

This is a very important question for traders, as the highest probability of success undoubtedly lies in trading with the trend, going with the flow, so to speak.

Therefore, the thorny problem of how to identify a trend — and how to identify it as soon as possible — has been addressed by countless traders, including some of the brightest minds out there, and including the trading firms with the deepest pockets and the greatest resources.

Of course, there is no single and perfect answer.

The real answer is that you can never be completely certain until it is too late, and you are looking back at a fully fledged trend which you have missed.

So as with most aspects of trading, there is uncertainty here. Which most traders hate, but you must learn to live with.

There is a balance between the benefit of identifying a trend early, so that you benefit from the majority of the move, and the higher uncertainty which exists in the early stages of a trend. Such uncertainty leads to a lower probability of success, but there is a higher reward if you are right.

It is a compromise, and a balance which must be addressed and decided upon by each individual trader.

if you fully take on board that there is no perfect measurement for a trend, no perfect way to time your entry, you can be satisfied with making a decision based on what suits you best.

And you can do well both ways — by entering early, with more uncertainty and higher reward, and by entering later with more confirmation, more probability, but less of the move left to benefit from.

At the end of the day, both will probably give you similar results. It is a question of which way of trading makes you more comfortable.

If we had decided upon that as a measurement for the beginning of an uptrend, and then traded the pullbacks, we would have done well. 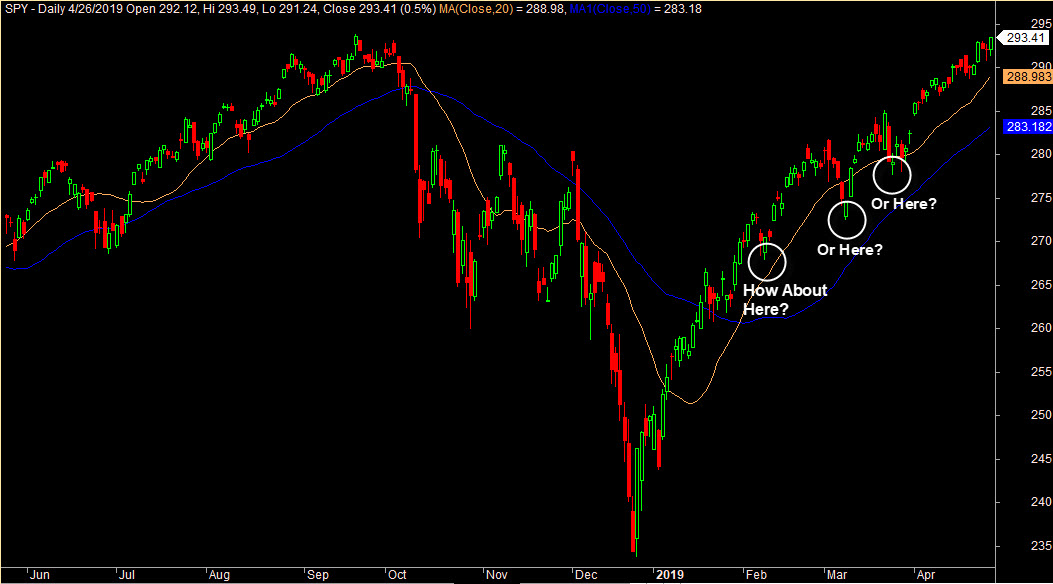 By the time the first pullback occurred, several things can be seen:

All this would give us some confidence that the uptrend is in place and has some stability.

I would never recommend using a moving average crossover as a trading signal, but moving averages can give a good indication of the point where a trend changes at the crossover, and the status of the trend.

Some people have gone one step further, and added a third moving average. Requiring all three moving averages to have crossed and be in the right order. I.e. the shortest average should be upmost for an uptrend. To give credit, Dave Landry was the first person I saw publish this, naming his method the 'Bow Ties'.

I think the first person to pioneer this was probably Alan Guppy. I have seen multicolored moving average ‘rainbows’, using as many as 10 moving averages, or even more. Whilst this makes a pretty picture on a chart, I think sufficient utility can be gained from just two moving averages, and certainly from three if you wish.

As I write this, in March 2020, we are in the throes of yet another sharp market down move. Which makes this article very timely. But it is also evergreen, in the sense that these events and moves play out the same way in the markets, over and over again, timelessly.

Here is today’s chart of SPY, again. It sure looks like a falling knife to me!

Bear in mind, of course, that the market can do absolutely anything, and I am most certainly not making any prediction.

However, the state of uncertainty that is evident at the right edge of this chart means that making the assumption that we had put in a bottom here, and attempting to buy stocks at fire-sale prices, would be a gamble for me.