The Rationale And Proof Behind Relative Strength

For how to use Momentum and Relative Strength in your own trading, click here: How To Use Our Data Tools

Momentum has been well proven. It has been around a long time, and it has been thoroughly researched by the academic world.

Many tests and studies on momentum have been published, so it is really important to understand that momentum is the fundamental building block of Relative Strength. 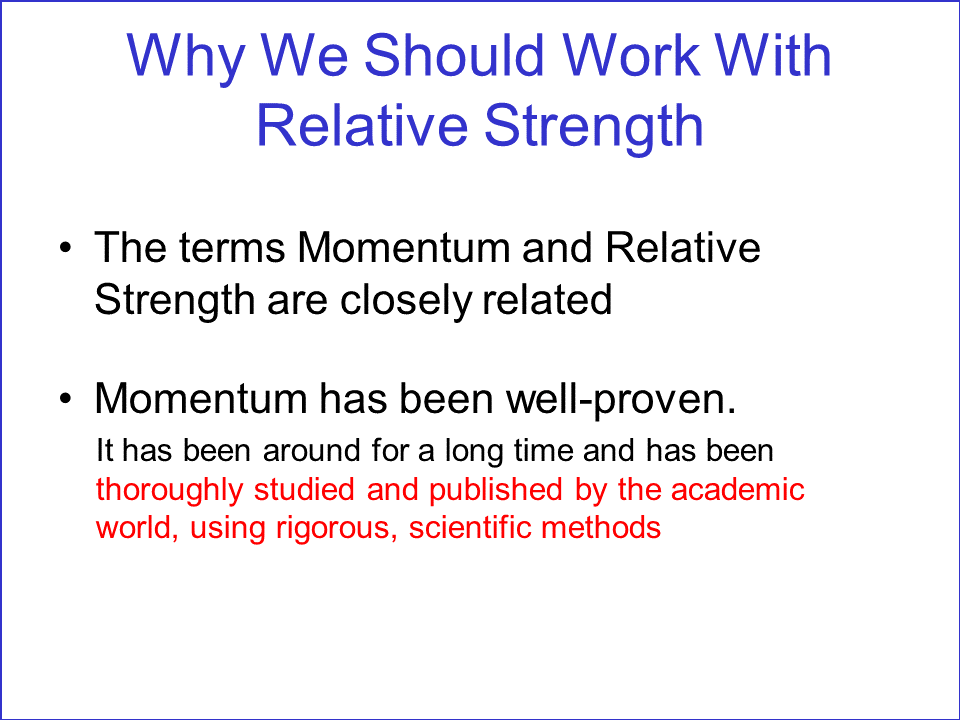 Relative Strength takes momentum a stage further by ranking the momentum performance of a number of stocks, so that it can be seen at a glance which are the stocks exhibiting the greatest Momentum, or the highest Relative Strength. 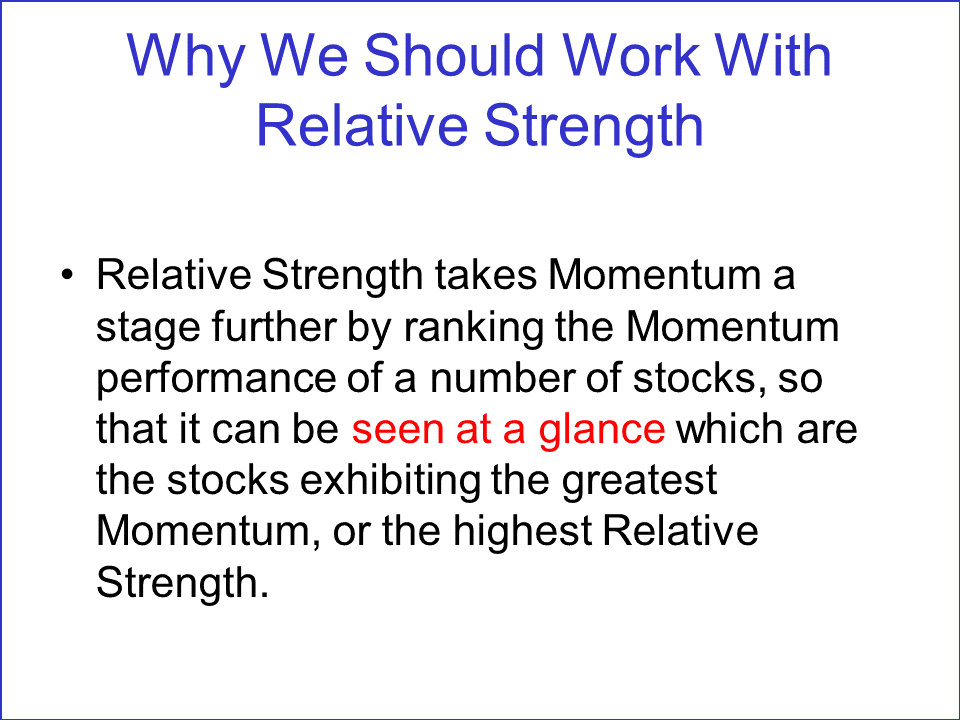 We mentioned earlier the importance of a strong foundation with statistical significance. It would be great to know that the concept of momentum and relative strength is not some new idea with no proof behind it. We would like to know that we can have confidence in it.

And we can have confidence, because it has been acknowledged since the 1930’s and has subsequently been shown to exist in the markets long before that. It is still in evidence and still working today and is, in fact, in use right now by some of the most successful hedge fund managers out there. 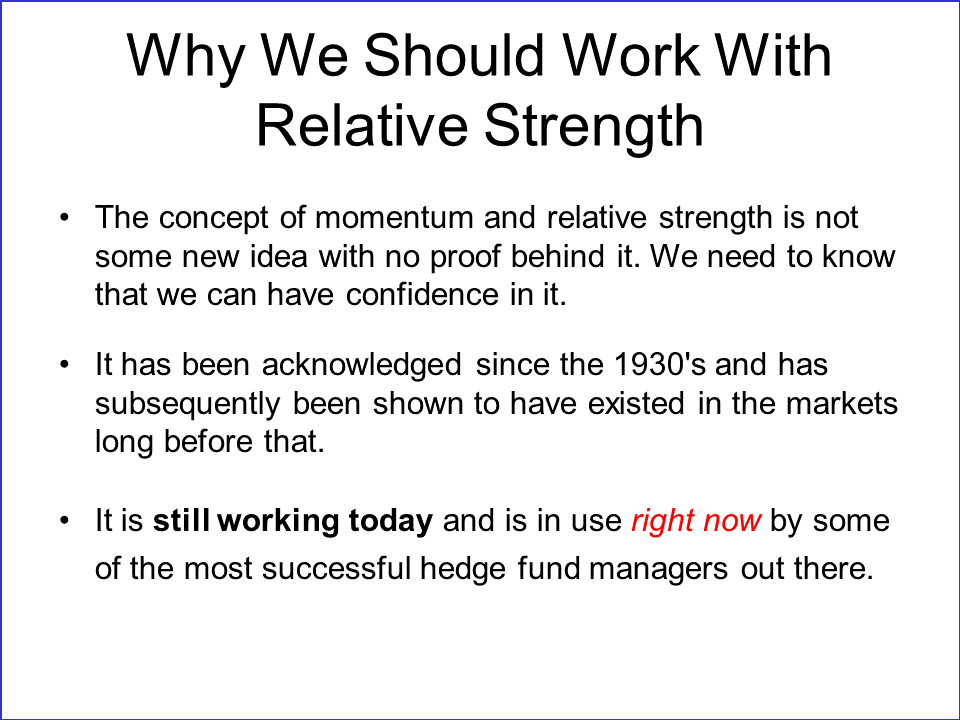 Here’s a few of the most important points that we really should know about.

Momentum came to prominence in the 1920s and 1930s. The most famous publication about that era is probably ‘Reminiscences of a Stock Operator’, which is about the legendary trader Jesse Livermore. Livermore’s method was pure momentum.

In the same era, the momentum-based methods of H M Gartley and Richard Wyckoff were published.

Wyckoff’s methods in particular have gained reputation and fame, with popular courses being published. 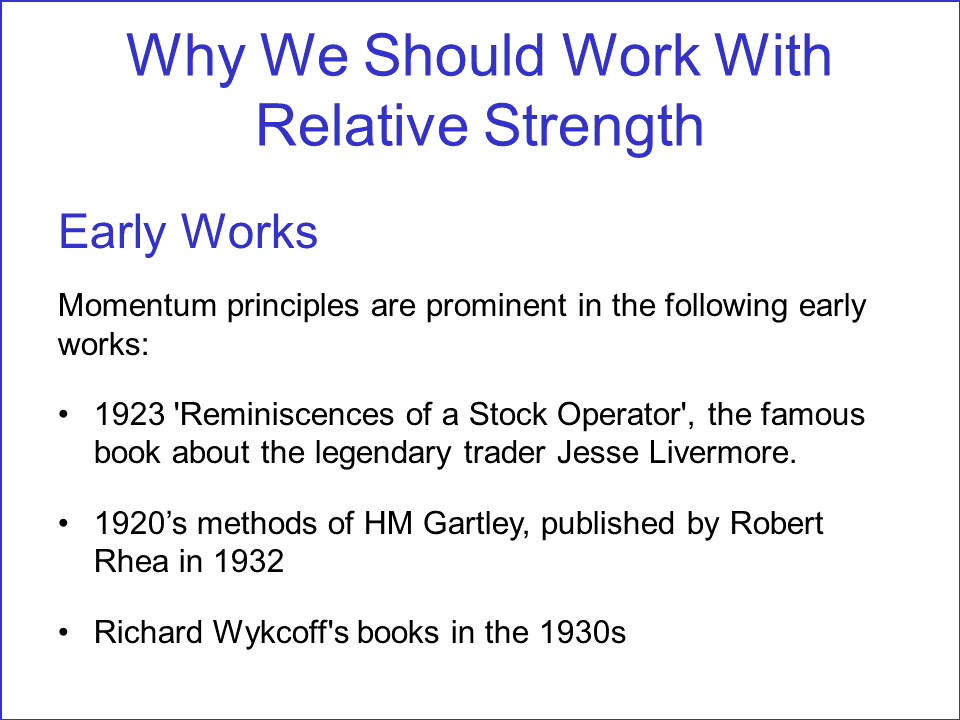 Even better, Momentum has a strong basis in the scientific studies of academic research. We can only scratch the surface here, but here are a few of the highlights:

In 1937, Cowles and Jones published the first known scientific momentum study. Compiling their data by hand, they discovered that the best-performing stocks tended to exhibit strong performance in the next year.

Robert Levy published his research into Momentum/Relative Strength in the 1960’s. He published first for his doctoral thesis and later, in 1968, an article in the ‘Journal of Finance’. His method was to calculate the Relative Strength of each stock and then rank the list by percentiles. He found that a high relative strength ranking led to strong performance in the stock 6 months later.

Unfortunately the academic world was not ready for him. The seriously flawed Efficient Markets Hypothesis (EMH) and Random Walk Theory had just been adopted, and the world of Academia was not going to accept anything that cast a shadow on their pet theories. Levy’s work was heavily criticized.

In 1998, Jegadeesh and Titman published a now legendary paper. Their findings confirmed what Levy had found 30 years earlier 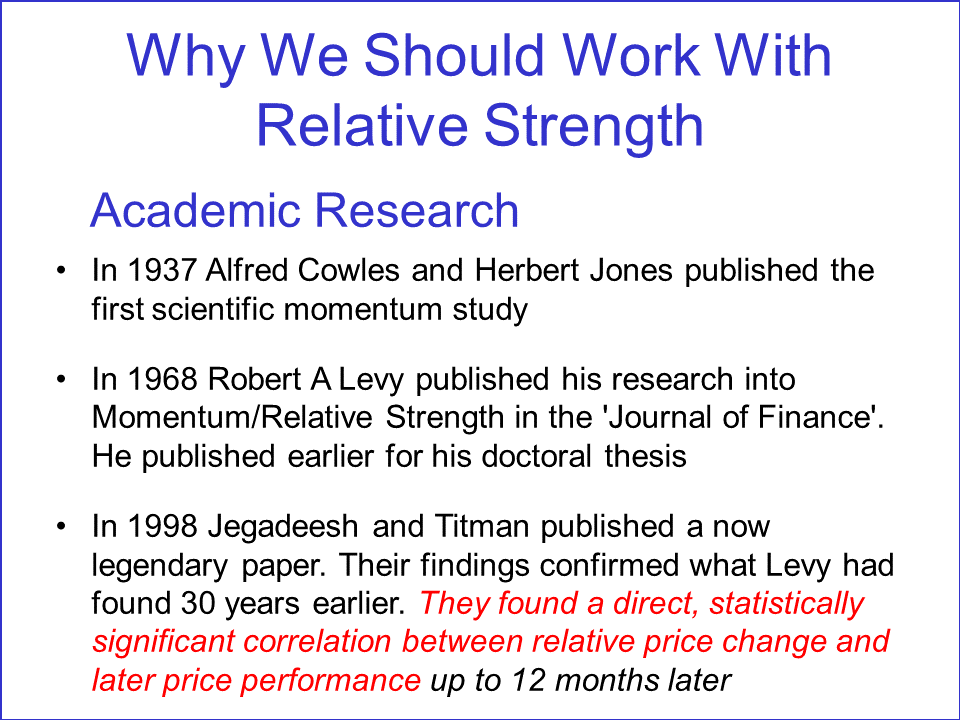 Coming up-to-date in the modern world, Cliff Asness has been an outspoken supporter of momentum/relative strength.

Why should we care? Well Cliff Asness is a legendary hedge fund manager, with a net worth of 3.6 billion who is telling us loud and clear that momentum/relative strength is the prominent factor in his strategies.

He has published two white papers on momentum and one of them — ‘Fact, Fiction and Momentum Investing’ — is entirely devoted to providing proof of the validity of the momentum/relative strength factor. 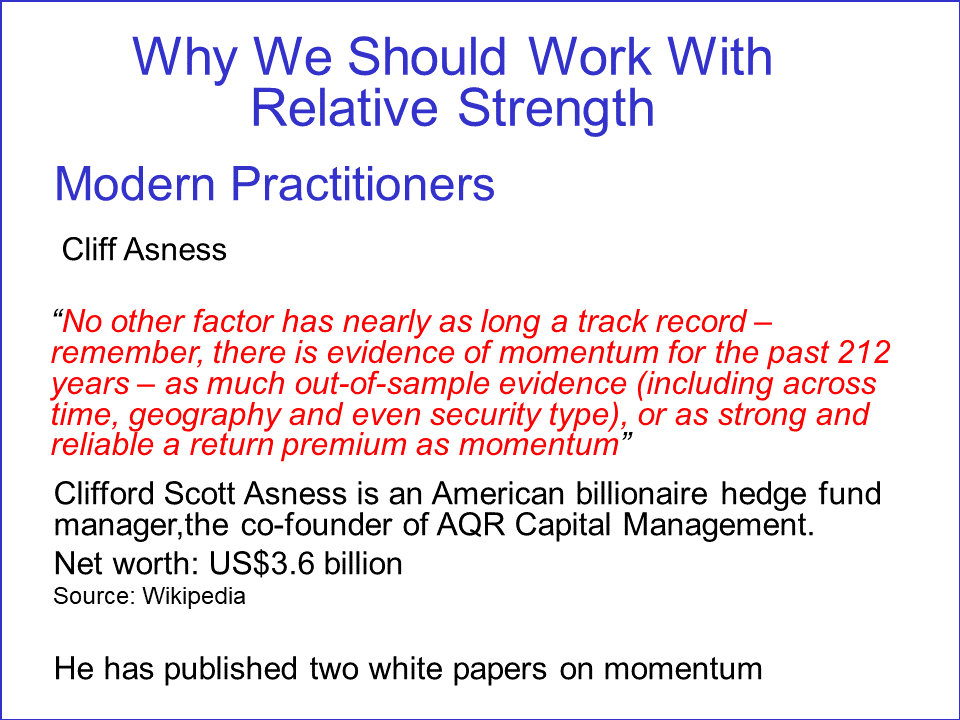 Kirkpatrick says: “The most reliable technique for selecting stocks is Relative Strength” 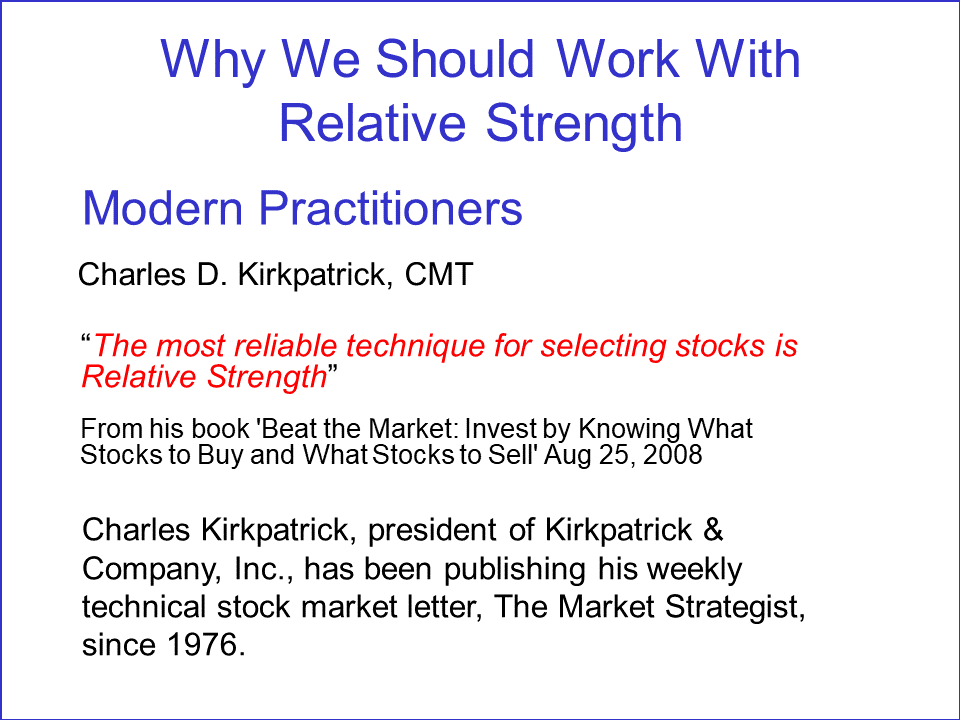 Finally, we come full circle to Eugene Fama — the very same person who championed the Efficient Market Hypothesis in the 1960s — look what he says now:
He says that momentum is ‘the premier market anomaly‘, ‘the center stage anomaly‘… — he even says it’s ‘above suspicion‘ 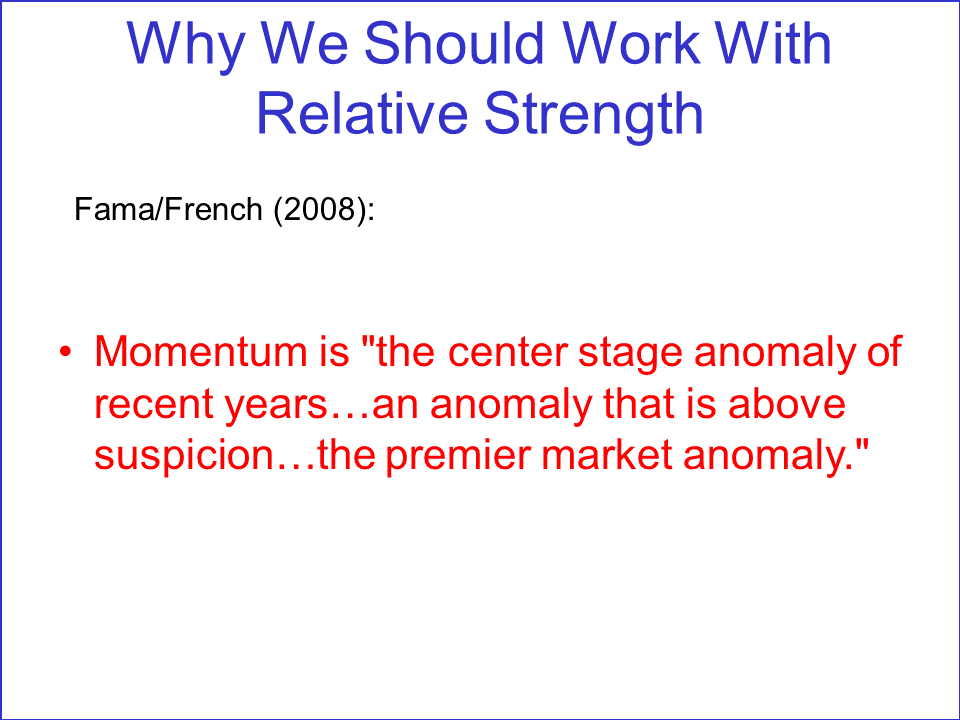 OK, that’s enough for now. There’s plenty more evidence out there, but I’m sure you get the picture by now — momentum relative strength is a long and widely acknowledged phenomenon.

And it is particularly significant that it has continued to work and hold true despite being widely publicized over a long period. 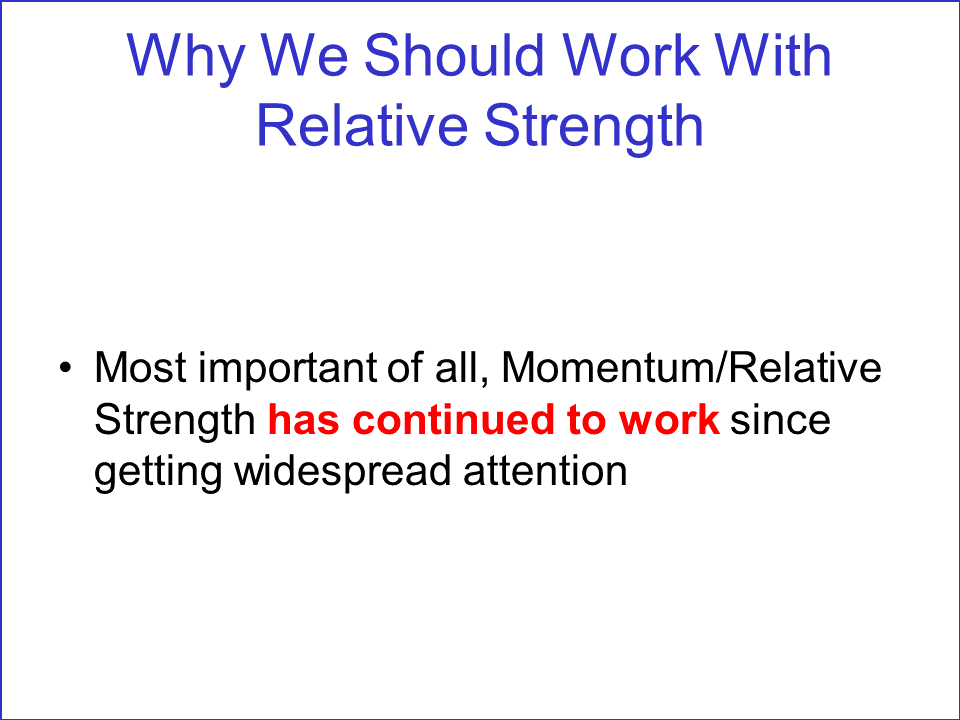