We mentioned the 90-90-90 rule here: What Successful Traders Know

Ex-Goldman Sachs trader Anton Kreil tweeted this and discussed it in published videos.

Our mission here today is to avoid joining the 90% by debunking the four most dangerous myths in trading.

I can tell you now that, when I started trading full-time in 2005, I only escaped disaster (being one of the 90-90-90) by the thinnest margin of good fortune.

Along the way, I realized some of my errors. And, recently, I started to notice how many questions are being asked about the same things. And every one of the people asking these questions clearly had the same misconceptions. They fall into four categories. These four trading myths are responsible for a lot of traders failing. I think they cause the biggest trading errors and are the biggest reasons why traders fall into the 90-90-90 group.

We will deal with each one right here, so that you can avoid the same traps.

Don't be worried if you recognize mistakes you are making. You are in good company, and there is no criticism implied. These are simply things every trader must understand.

The best and most essential thing you can do for your trading is to dismiss the fantasy, and get yourself a rational outlook on trading, based on real-world facts.

So, read the following carefully and, please, take the principles fully on board. Consider it a helping hand from someone who has been there, avoided disaster by pure luck, and survived to tell the tale.

You see it everywhere. We are inundated every day with the concept that trading is easy. As mentioned elsewhere, the ads and infomercials are partly to blame for this. And then there are the seminars, the youtube videos, the forum posts, the claims put out by people on social media.

But this stuff is put out by people who want to sell you something. The myth is that if you buy their training course, their software, their whatever, you can immediately be successful.

And everybody knows that if you are successful in trading, you can make a lot of money.

So the vendors and marketers jump straight past the probability of failure, and go straight to the results of success -- they show you expensive cars, boats and homes. And beaches and palm trees and exotic locations. And rolls of banknotes and expensive watches.

As if these thing are a natural result of buying whatever they are selling.

You Can Make A Lot Of Money Trading

Part of it is true. If you are successful in trading, you can make a lot of money. But all the stuff about it being easy to get there is the biggest myth in trading. It is incredibly hard to get there.

And that's because it's so difficult to do everything you are required to do to get to those winning results. Even if you know what you should do.

Not, Me, I'm Different

Once again, you may be reading this and thinking "Not, me, I'm different". But that's a age-old problem creeping in. Confidence in yourself, and instinct. Which are things that serve you well in other areas of life.

And also an over-optimistic estimation of ability. Trading has dramatically different requirements and disciplines from any other form of business. So, such an over-estimation is almost certain -- you don't know what you don't know.

Unless you understand the right thing to do, in trading, and why you must do it, and unless you go the extra mile and train yourself to actually do the right thing, your evolved human nature and your life experience will cause you to do the wrong thing.

With a faulty, big-picture assumption that trading is easy, a trader immediately runs headlong into to a number of big problems. Here's a quick summary of the sequence that hits a typical beginning trader as a result.

If we think trading is easy and brings in quick profits, it follows that there is:

Because they don't know how or why to enter a trade, there is no real rational basis for the trade to make a profit.

And, in fact, each and every trade anybody ever puts on has a 50-50 chance of winning or losing. That's right. Even a very successful, accurate trader who wins 70% or 75% of his trades over time, has a 50-50 expectation for this next trade. The successful trader makes his profit from a number of trades over time. This is a big subject. We covered it in more detail here: What High Probability Trading Really Means

Because he is convinced he is going to win -- he is seeing it in his mind's eye -- he has traded a position which is far too big for his account size. This means, if the trade loses, he will lose far too much of his account on this one trade.

And it gets worse. Because he doesn't understand risk management -- he doesn't even see the need for it — he has no pre-defined exit plan, and his loss is going to be even bigger than it should have been.

He has no concept of how probabilities apply to his trading. So he doesn't know that he is going to endure a string of losses at some point -- no matter how good his trading system is, and no matter how well he is trading it.

But he doesn't really have a good trading system. And he doesn't have either the knowledge or the ability to trade it well. (Two different things, which we will cover later). So his string of losses is likely to come sooner rather than later.

Because he is not maintaining good position sizing and good risk management, he has an extremely high probability of either losing his whole account, or quitting when he has lost a large percentage of it.

This is why 90% of traders fail

And it is completely unnecessary. It can be easily avoided, if a trader just takes on board the correct expectations when he is starting out.

But hardly anybody does.

It's a bit of human pride and hubris ("I'm different. I'm special, I'm way smarter than the average guy"), and another very insidious human trait: we believe what we want to believe. We fail to look at facts. We make decisions based on emotion, not based on research and rationale.

But, it is possible to avoid the fate of the 90%. The path to trading success is right here, in this article. But it's hidden in plain sight, camouflaged by human biases.

Paradoxically it does require you to be different from the majority. But it's not 'smarter' that you need to be -- it's MORE HUMBLE.

Trading can bring big profits. There is plenty of fact out there to support this. It's true -- it's indisputably true.

But it's not going to be fast.

And, as we saw above, it's not going to be easy.

So big easy money is another fantasy that has to go.

In order to make big profits, one of two things has to happen.

The first would be that you put on the kind of huge risk which no sane person would dream of, and you get lucky.

This is obviously completely unpredictable, and completely unsustainable. You can't depend on luck, and you're going to go bust quickly if you don't get it.

The second is that you:

Basically, the path to making big profits requires that you learn what you need to know, do what you need to do, in order  to trade correctly. And have realistic, rational expectations. In other words, know what to expect. And make sure you know in advance what you will do in adverse scenarios.

Trading success rate is completely dependent on these elements

Which is why it's time-consuming and hard. But not impossible.

Myth #3: No Need To Consider Risk (Because I'm Going To Win)

New traders concentrate on profits. They tend to put on a trade with great anticipation. They just 'know' this is going to be a great trade. They wouldn't be putting the trade on, otherwise, because that is their prevailing mindset.

Because they are so convinced this will be a great trade -- they can see it in their imagination -- they break two of the most important rules in trading, both related to risk.

Price reaches their stop and the idea that the trade is going to be a winner is so entrenched, that they wait for it to come back.

It's too hard to admit that they're wrong, because everything has been based on 'knowing' that the trade was going to bring in a profit. And, anyway they're losing money -- if they exit the trade now, the loss becomes real.

But, most often, price will continue the way it's going. The trade doesn't 'come back'. So they finally call quits when the pain is too great, and suffer a loss which is even bigger.

This is so essential to understand that we covered it in full here: What High Probability Trading Really Means

The complete understanding and acknowledgment of these two facts means that the trader will be very careful to trade the correct position size, to use the appropriate stop loss, and to honor the stop loss if it is hit.

For these people, there is no possible question of acting otherwise.

They do not second guess, and they are not ashamed of losing. They accept that losses are an inevitable and necessary part of trading. But they also completely understand that to get through the losses and reach the winners, the number one priority in their trading must be dealing with risk. They know they must first protect their capital.

We see that there is a stark 180-degree difference in how trading is viewed by a successful professional trader, compared to the beginning trader.

Here is a compilation of the two graphics above so that we can compare side-by-side the trader's losing path and the trader's winning path. 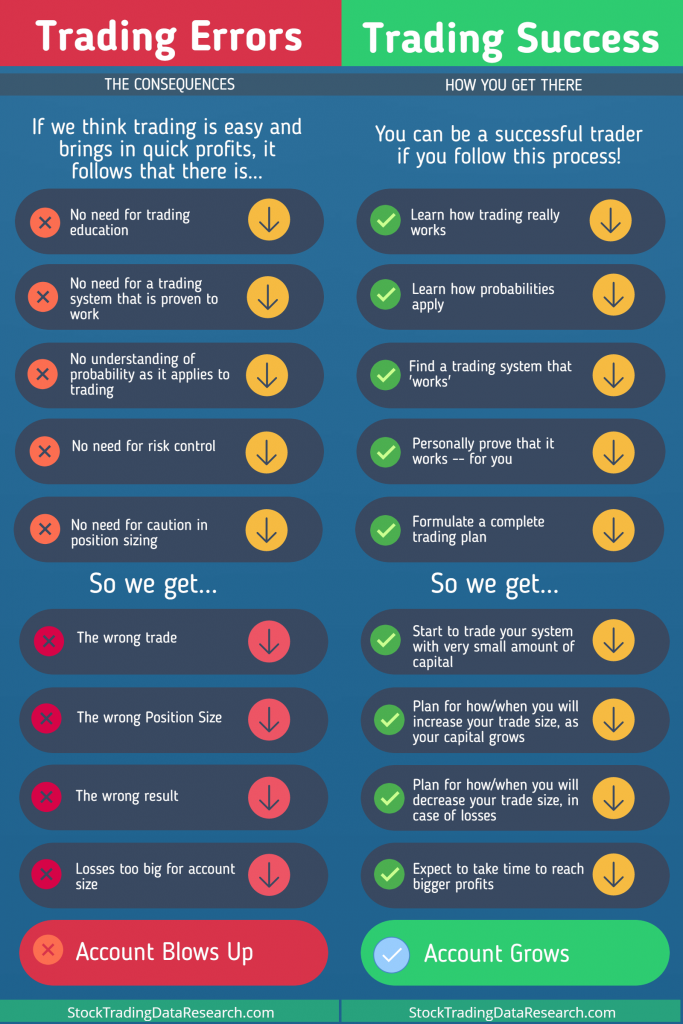 You will never be a successful trader if you don't get on the right side of this dividing line. Just about all sustainable trading success stories are a result of following this path to success.

Myth #4: I Can Start Trading (And Make A Lot Of Money) With Low Capital

Funnily enough, it is actually possible to do this! As long as you do not expect to do it either:

Fast
or
Without the necessary education.

We talked about this above. However, it's a complete myth for the 90%, because they expect to do it right now with no education, and they expect get rich quickly. The successful professional trader fully understands that his profit is inexorably tied to the amount of capital he is trading. Because his risk management is rigorous, he never trades with higher risk than his plan dictates. And the position sizing will be entirely dependent on the size of his account. So, therefore will his profit. The beginning trader expects to make a fortune from a tiny starting account and, worse, he expects to do it fast...

The trader who follows the correct path of starting small and scaling his trade size out of profits can start trading with low capital and make a lot of money. It is done by the power of compounding. Which Einstein described as the 8th wonder of the world. Einstein actually said 'compound interest'. But compounding your profits follows exactly the same principle.

See also:
Can I Safely Invest In The Stock Market?